Military Canines, Part 1: Saying So Long to a War Veteran 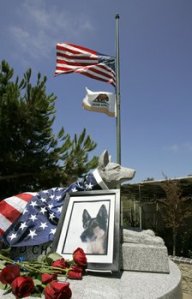 A member of the United Sates Army for ten years,  she  put her life on the line. She was a drug-detector in Germany, where she was trained. She worked security in Kuwait. She worked patrol in Iraq. About seven months ago she was diagnosed with pancreatic cancer. When the cancer finally began to threaten her quality of life, a veterinarian decided to euthanize the German shepherd. Rancho Coastal Humane Society, where she spent her last eighteen months, held a memorial service for her. ‘A volunteer at Rancho Coastal said “she was one of the friendliest dogs you’d ever meet.” It was hard, he said, to “fathom that this dog used to be a soldier. She was like a family pet.”’

Chyba (rhymes with “Sheba) was adopted in 2010 after her retirement from the military by Madeleine Pickens, wife of T. Boone Pickens. Jim Silveira, Rancho Coastal President, accompanied Pickens when she picked up Chyba, so when Pickens began to travel last year,  Silveira was a natural choice for Chyba. 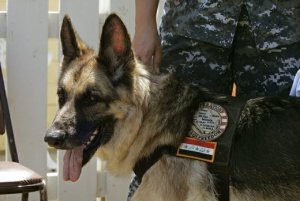 Rocky, Chyba’s classmate, wears his service tags at her memorial.

Silveira had never worked with a military dog, but if he had any apprehension, Chyba fixed that. “She had that personality and those eyes that just sucked you in,” he said. “The first hour that I was with her when she came back from Germany, I was done. I was sold.”’

The flags at Rancho Coastal were half staff. A rendition of Taps. A Young Marine color Guard. Rocky, a classmate. And approximately fifty people – all there to honor the veteran Chyba and her remarkable service to the country. 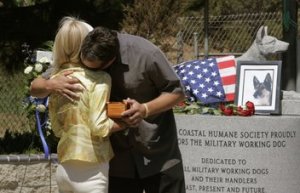 Ever-evolving spirit moving about via body. I'm a writer and a an ever-evolving spirit in service of animals through my blog and Buddhist and Reiki practices. My blogs: AllCreaturesLargeAndSmall.wordpress.com. and AmirhBahati.wordpress.com. For more about me: http://amirhbahati.wordpress.com/about/
View all posts by Amirh →
This entry was posted in War Dogs and tagged Chyba, Dog, Dogs in warfare, Germany, Iraq, Kuwait, Madeleine Pickens, T. Boone Pickens. Bookmark the permalink.

1 Response to Military Canines, Part 1: Saying So Long to a War Veteran