She was half-feline, half-spirit, and on June 25, 2012, a Monday, she left her body behind and entered the realm of pure spirit. She answered to Zozo, Zorita, and Pretty Face. Near the end I thought of her as Zora the Beautiful. And she was. Even at sixteen, I thought she looked half her age.

Actually, I knew her before she was born, because on a cold winter’s night I adopted her mother, Precious, a member of what I call my Fire Escape Cats. About ten days later, Zora was born, along with her sister, Linda, and two brothers, Gadu and Pushkin.

Sometimes I would just look at her, because she was eye candy. In a way, part of her seemed and, at times, looked, untamed, undomesticated. I loved to watch her jump, something that gave her a lot of pleasure. Her legs were long and her lift-offs were effortless. She would glide before landing silently and precisely at her destination. Had she been human, she would have been an Olympian jumper or sprinter.

Sixteen years can bring a lot of experiences, and boy, did we have them. In 2002 there was a serious fire in the apartment, a fire that rendered it uninhabitable. At the time, I had Zora, her brother and mother, another cat and her other brother and sister who had been returned to my temporary custody. Zora was the cat most frightened by the events – the fire itself, firemen and the attendant commotion, the aftermath. I had gathered the cats and boxed them (we were going to stay with a friend), but Zora, in her state, bit me and escaped. She found the one hole in a wall, a hole that extended far back, and tucked herself away from my reach.

Night after night I returned to that apartment. For two weeks I left water and food and a clean litter box. By then it had rained through the holes in the roof, and the electricity had been turned off. I crawled through the soaked debris calling to her, found her hiding place, and reached in. In vain. She was not ready. I managed to get a trap from the ASPCA and loaded it with food and water. When I went back the next night, Zora had managed to get the sardines without activating the trap. That was the wild, jungle-smart Zora. In frustration I yelled to her that this was the way that a cat could become a stray. On the fourteenth night there she was, in the trap, as if to say What took you so long. Let’s go!

Zora was a cat with hobbies. She liked to sit in the window and watch the squirrels, birds, people, the movement of flower bushes in the wind, the rain that fell against the window, but being a pure indoor cat, she liked to watch from the safety of the apartment. 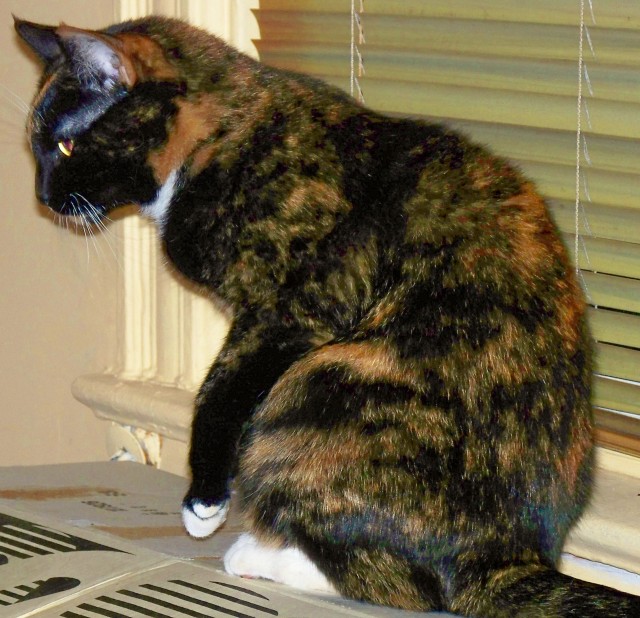 She liked to drink coffee and Coca-Cola, which I discovered by accident. Once I left a glass of soda with ice on the desk and walked into the other room. I could hear the tinkle-tinkle of ice. When I looked, I caught her dipping a cupped paw into the glass and then drinking. She did the same with coffee, and I wondered how many times I had drunk after that cupped paw that had been in the litter box…Ewww!

Her mother, Precious (see her bio here), and her brother, Pushkin, were very affectionate, and at times I wondered if Zora even liked me because she was the least affection, seemed to need no human attention, but that aspect of her changed when her mother passed over. She became my alarm clock, standing on my chest or back in the morning and meowing in my ear or sometimes touching my face with her paw.

Her kidneys were failing (see previous post), but subcutaneous hydration raised the values. Her thyroid began to act up and medication got it under control. And then her hind leg broke. Was it a weakness in the bone? A tumor? X-rays didn’t reveal the answer. The break was close to her pelvis — too high up to repair surgically, so the only medical option was amputation, but it was not a personal option. I sequestered her to keep her off the leg, and she hated it. For a while it got better and she could limp around on it. And then it got worse, and when it no longer supported her weight, she learned to hop like a bunny, all the while exhibiting no pain, just annoyance that her leaping days and prancing ways were over. 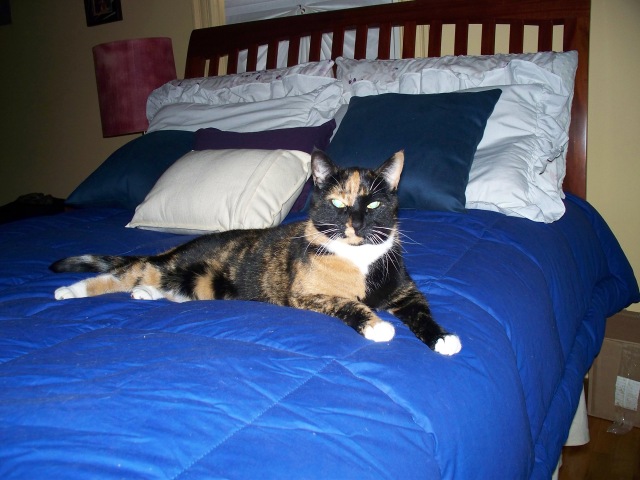 On Friday, June 22nd, the nature-girl aspect of her showed up. Surprising, like her mother, indoor Zora wanted to go outside, and she let me know by following me, three-footed, out the door. It was a warm sun-filled day. I thought we’d be out for a couple of minutes, but Zora had different plans. We were out for two hours. Passers-by stopped to remark on her beauty, but she was more interested in the blades of grass and butterflies. When I told them that I thought she was in her final days, they wished her an easy passing. The formerly-skittish Zora was bothered by nothing, not even the passing roar of the UPS truck or running children. She was just there. One with nature. Simply being. In the moment.

By Saturday evening she let me know that she was ready to go, spending the evening on the bed, mewing softly. From time to time, she would throw me that soulful look over her shoulder, and I let her know that I understood. I carried her to my Buddhist altar and chanted that she would have a comfortable evening; all the while her brother, the former bully and aggressor, gave us the space he needed. He was, in fact, solemn, understated, his presence diminished. We spent the evening together on the bed, my hand on her chest, me breathing with her. It was then that I experienced the full meaning of being in the moment, just being, breathing with another, not demanding a recovery, not thinking about the following day, not thinking about the past. Simply letting the process run its course. Whenever I would get up to eat or whatever, when I returned, Zora had pulled herself to my side of the bed, her head propped on my pillow, waiting for me with those eyes. Later in the night, Pushkin joined us. They lay together nose-to-nose, saying what they needed to say to each other.

On that last night, Zora the Beautiful was our teacher, our guru, our guide. 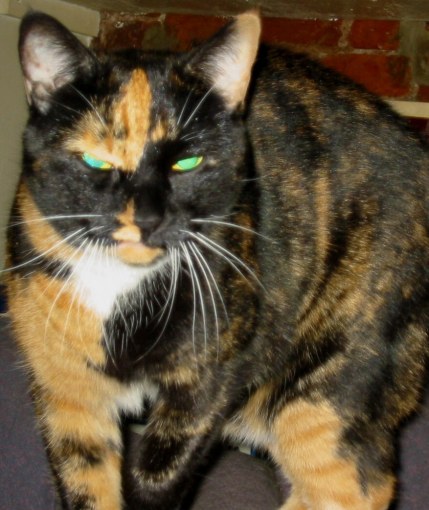